Work stopped today.  After seeing some of our Tweets,  Homebuilding & Renovation magazine have been on site to take pics for the April edition and video footage for their YouTube channel.

We tried to give people some tips and info on what to expect when undertaking a Self build project.

Tomorrow it will be back to the trowel and paintbrush.

After 2 weeks of boarding and skimming, between work and pricing up jobs,  the new dressing room is ready for a lick of paint.

Mrs M is off work for half term so when the kids are curled up in bed she gets the roller out.  Good quality Dulux paint was worth it – will still need a second coat with it being on fresh plaster. 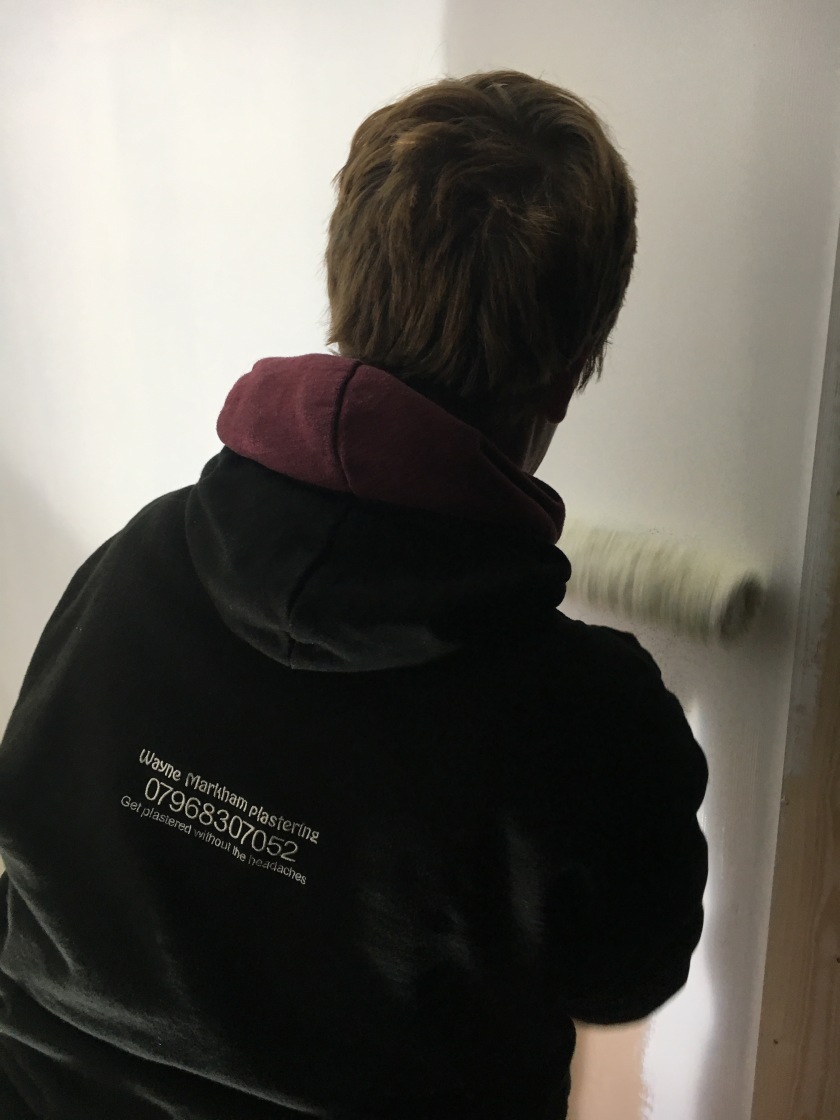 At the weekend Richard, a plasterer who helps me out on larger jobs, came and gave me a hand – in exchange for a pint.

I’m just hoping he can come and give me a hand when it comes to doing the stairwell as it’s going to be a bit of a challenge! 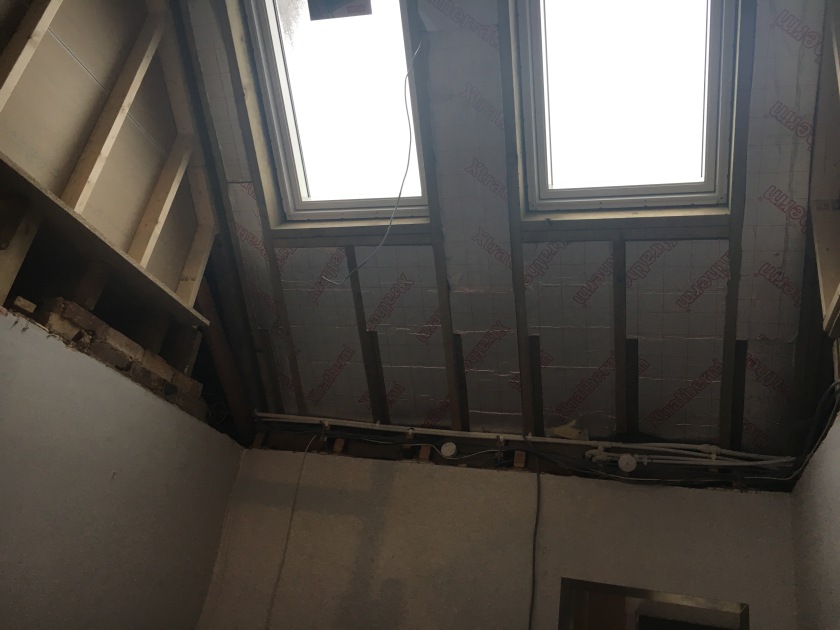 Here is the first wet mix of the project.

​​
My 6 year old was very confused when I told him – I think he was expecting some sort of cool dance move!

Openreach have also been on site relocating some cables and did a great job. Despite the bad press they get, Jason turned up on time,  worked out a way of doing exactly what we wanted- which was not straightforward- and got on with it.

Mrs M attempted to do a time lapse this evening but the camera was a bit too focussed on ‘where you could park a bike’ so we’ll have to try again from a different angle another day!

All those little jobs and the snag list were finished off today and the builders are gone.  This included over boarding our bedroom ceiling after the leak.  Unfortunately this included removing the coving which made more mess and dust than any other part of the build.
This is a reason to celebrate so Claire had ordered some Boomf so we could eat the dust!

This also makes me think the project now firmly rests on my shoulders.  What is going to hold me up this week is that I have emptied our local Travis Perkins of boards so the next delivery will be on Wednesday.  One advantage of being in the trade is the relationships you build with people.  The manager of our local TP knows what we are doing and rang to say they had some doors on offer, exactly what we wanted.  Another little saving £££

Despite the fact that 2 days ago the builders told us that architects plans for the stairs weren’t going to work (due to head height regulations) after a few adjustments we finally have stairs leading into the loft.

The process went as well as it could have done and we are very pleased with the result.

We no longer live in a prison! The scaffolding has finally gone after 7 weeks.
It’s looking great from the outside but the builder still has work to do inside.

Tomorrow the joiner is coming to fit the door frames and by the end of the week we should have stairs.

It feels like it’s been a slow week on site.  I’ve been out all week on a job so not been able to keep track of progress but there are signs of some of final little jobs being sorted.

Facias have appeared at the front of the bungalow, the stairwell has been finished off( but still no sign of the stairs) and the dormers have been finished off .  We are still no closer to taking delivery of the windows and the builder is considering cancelling the order and getting them from somewhere else!﻿

The electrician has done a very tidy first fix and we’ve taken delivery of the plasterboards so I can get stuck in now.

Mrs M walked in from work and without even getting a cuppa she got stuck in helping me load out.

The plan for this weekend is to get the dormers insulated with Thermawrap which I picked up late yesterday thanks to Screwfix’ click and collect in a minute service.

Builders were on site early to finish off the exterior of the dormer windows which are now looking far bigger.

The wife had her first exciting delivery – a new light for the hallway from Wayfair (very well packaged I have to say) . She is getting a bit eager with the final touches and has organised a carpet fitter to come out on Saturday to give us a quote. Hopefully she appreciates the amount of work that is left for me yet.

I attempted to fit a door frame and it turns out that it is a harder job than I thought.  A quick phone call to a joiner contact I’ve worked with before and there’s no need for me to have to google how to do it anymore! He’ll be on site early next week hopefully.

And finally the electrician came on site to finalise details of the first fix which he’ll be doing on Thursday.

But the biggest news of the day has to be the invitation by Homebuilding and Renovating magazine to feature in their ‘on site’ section.  I don’t think Claire will ever stop talking about it!

6 weeks since the scaffolding went up things are coming on nicely.

This weekend I spent all my spare time putting up the stud walls.  The builders haven’t completed the floor and the dormer windows still aren’t in but it was time to get stuck in! 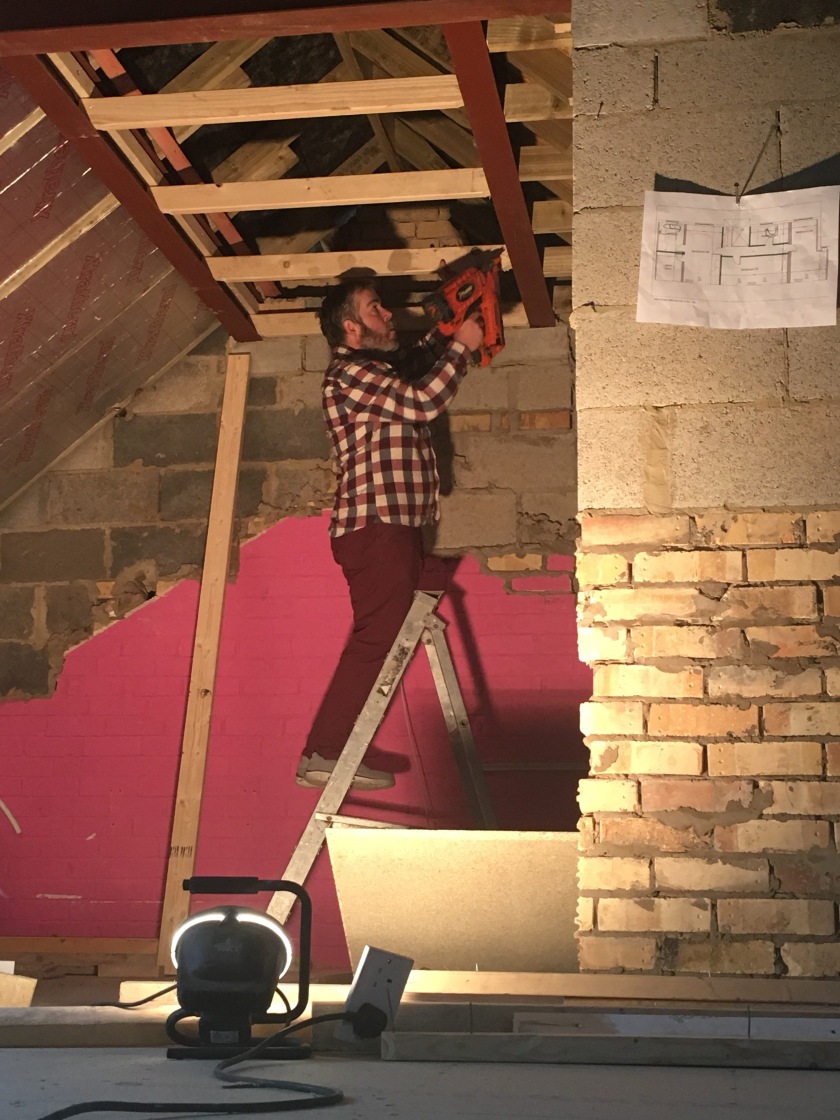 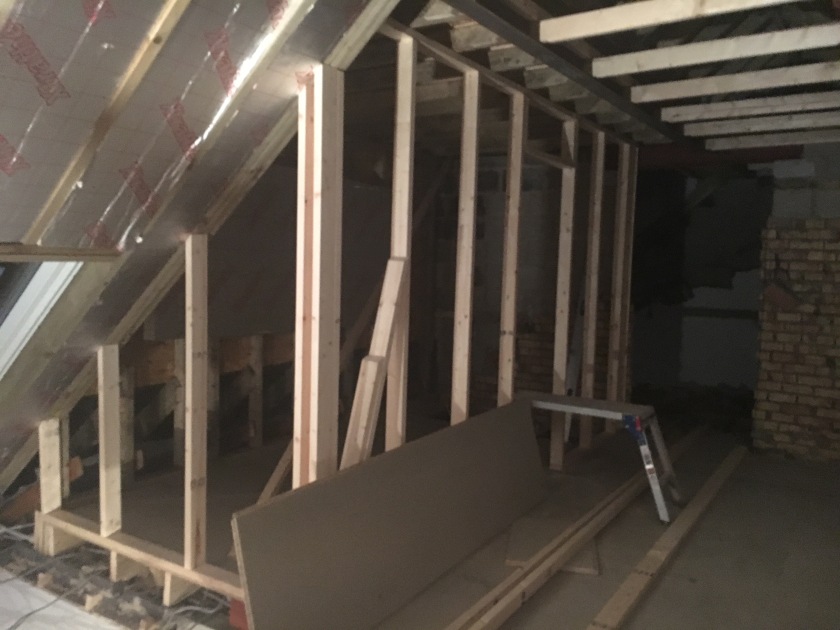 We even had our first visitor, a little red admiral butterfly sheltering from the cold.

After a few days of being COLD inside we now have a fully functioning new boiler system all connected up and pipe work upstairs.  The gas engineer had a site visit from ATAG to sign it off and we have have digital display and App connectivity.

Hats off to Michael at www.ukgasbillinghay.co.uk for his hard work and we would recommend his services to anyone.

Ok, so the temperature is not Caribbean yet but please don’t forget we have a huge hole as a stair well, no walls and only half insulated upstairs – oh and still 2 missing dormer windows.  Ordered weeks ago, the manufacturer shut up shop for Christmas and we still don’t have a delivery date.

Anyway, I can finally get stuck in with a bit of stud work. 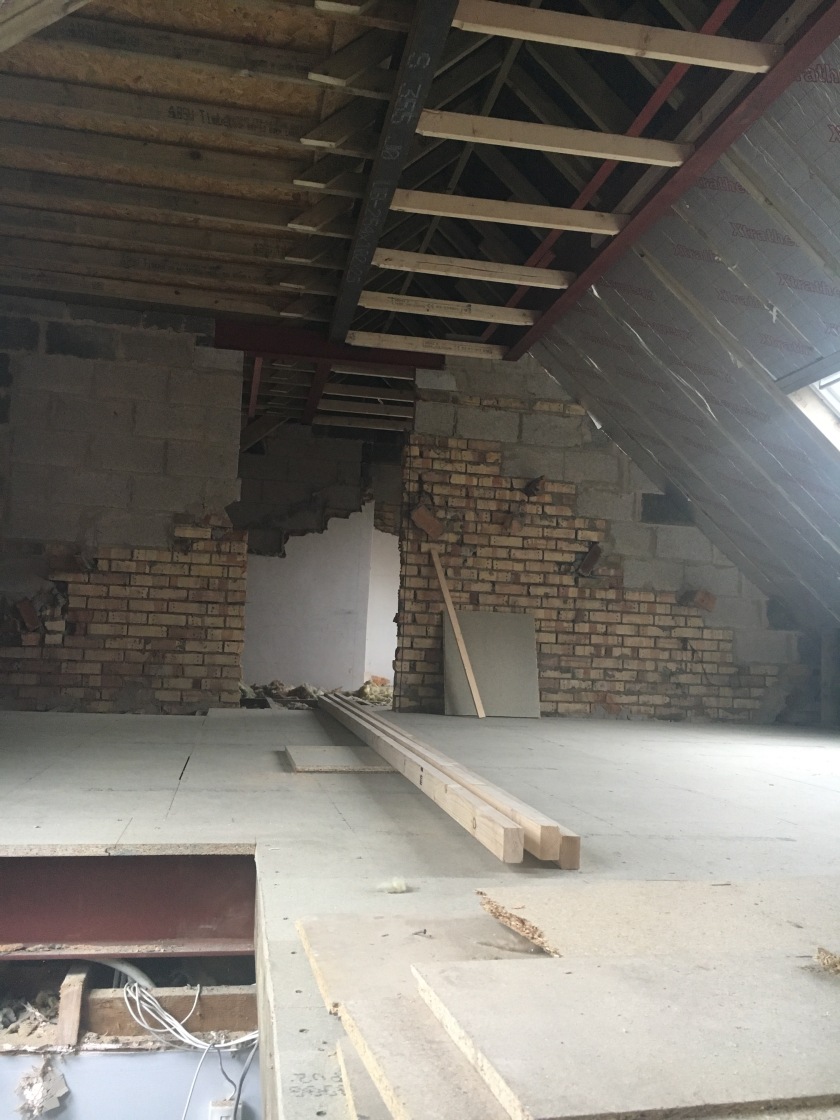